What to Expect from Campaign Fundraising

If you have never been a political candidate or a finance director for a campaign, this guide is for you. It will give you an idea of how political fundraising is likely to change over the course of a campaign.

The most important thing you can do is reach voters with your message. Without a significant budget, you’re almost certainly not going to reach enough voters to hit your goal. If you’re the candidate, raising the budgeted amount is on you.

Start by calculating your win number. Then get an idea of your targeted voters and build your campaign plan. Then it’s time to think about how you’re going to actually build your campaign budget. This guide gives you a broad overview of campaign fundraising and how it changes from day 1 through election day. For more practical guidance on the day-to-day of raising money, check out the call time guide.

Every campaign is different, and the fundraising roadmap for your campaign won’t be exactly the same as any other campaign — but there are trends.

Take a look at this chart. Each of those lines is a winning candidate I worked with. These range from very small campaigns to large campaigns with hundreds of thousands of voters participating. The lines are different lengths because the campaigns were different lengths; I’ve put election day on the right-hand side so we can compare apples to apples. 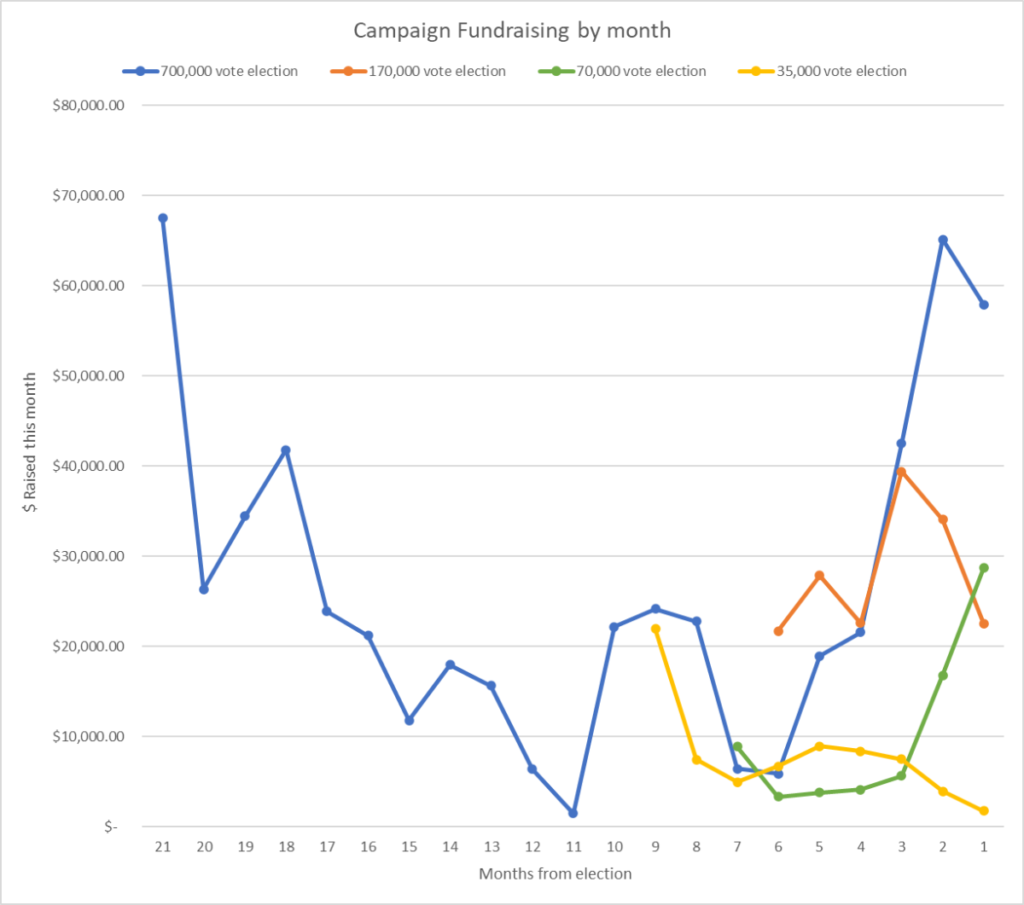 THE BLUE LINE (U curve)

The most common trend is visible in the biggest campaign on the chart: the blue line. This candidate started early and raised a lot of money from their network in the first few months. We aggressively pursued people who had supported them in the past and were personally invested in the success of their campaign. The first month of this campaign brought in almost as much money as the entire budget of the yellow and green campaigns.

Then monthly fundraising dipped to a level comparable with much smaller campaigns, before spiking again at the end. In the final months before election day, your campaign is much more topical and it becomes easier to get bigger contributions and even just to get return calls. This kind of U curve is the most common shape for campaign fundraising; good performance at the beginning of the campaign, good performance at the end, and lower fundraising in the middle.

This is a less common trend, and one you see most often in extremely short campaigns like this 6-month effort. This primary campaign in a crowded field had significant financial support from the beginning and maintained that support through the campaign. Obviously the curve is not actually flat, but there is no significant upward or downward trend across the life of the campaign.

The shorter your campaign, the less lead time you have and the more important it becomes to avoid the dip that the 21-month campaign saw in the middle. You’re almost certainly going to raise less money than a long campaign, but every bad month makes the gap harder to overcome.

This state house campaign started with less support than the blue or orange campaigns. The candidate had a great resume and a great story, but not a very strong network. You can see a little bit of a U curve in that fundraising dropped after the first month — but it didn’t really have far to fall. This candidate was able to supercharge the late-campaign interest in the race by attracting the attention of a national political figure who held events and helped with fundraising. Sometimes that late spike in fundraising is enough. This candidate was able to narrowly beat a Republican opponent who raised more than twice as much money, but wasn’t able to connect with a changing electorate.

Sadly, J curve campaigns often do not pull off victory like this one did. When supporting candidates, keep this in mind — they could really use your help early!

This candidate started the same way as the blue candidate, but on a much smaller scale (just 12% of the budget and 5% of the voters participating). They raised heavily from their network in the first month and then fundraising fell off. By the time we were 3 months out from election day, we had hit the goal budget and the candidate didn’t want to do structured call time anymore.

As a consultant, I will always tell you the same thing I told this candidate: don’t stop doing call time! If you haven’t hit your budget goal, this is non-negotiable. But if you’ve raised everything you planned to raise as this candidate did, then it’s ultimately the candidate’s choice how to run the campaign. So in the last 3 months we continued raising money, but without the structured call time that is the foundation of the fundraising program. You can see what that did to fundraising numbers in the final 2 months.

So the L curve shows up when a campaign stops raising money at the end, usually because the candidate is no longer doing call time. If you’ve hit your budget, this can be ok (the yellow candidate won!). But if you haven’t hit your budget, this is a very bad choice. Either way, you’re always better off with more money to reach more voters more times before the polls close.

Want to take all this with you?

We are working on an ebook incorporating all the campaign information gathered in this site. We can let you know when that’s available so you can take the campaign guide with you and review it offline.

Sign up below to reserve your spot on the waitlist.

Reserve my spot
Don't have an account yet? Register Now